Researchers from the National Institutes of Health have found that less than an hour of cellphone use can speed up brain activity in the area closest to the phone antenna, raising new questions about the health effects of low levels of radiation emitted from cellphones.

The researchers, led by Dr. Nora D. Volkow, director of the National Institute on Drug Abuse, urged caution in interpreting the findings because it is not known whether the changes, which were seen in brain scans, have any meaningful effect on a person’s overall health.

But the study, published Wednesday in The Journal of the American Medical Association, is among the first and largest to document that the weak radio-frequency signals from cellphones have the potential to alter brain activity. 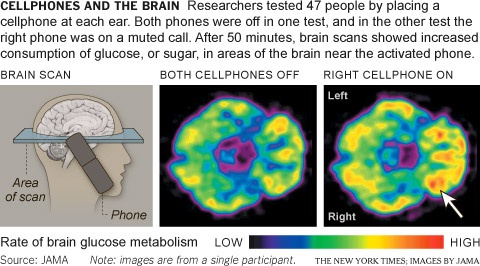 “The study is important because it documents that the human brain is sensitive to the electromagnetic radiation that is emitted by cellphones,” Dr. Volkow said. “It also highlights the importance of doing studies to address the question of whether there are — or are not — long-lasting consequences of repeated stimulation, of getting exposed over five, 10 or 15 years.”

Although preliminary, the findings are certain to reignite a debate about the safety of cellphones. A few observational studies have suggested a link between heavy cellphone use and rare brain tumors, but the bulk of the available scientific evidence shows no added risk. Major medical groups have said that cellphones are safe, but some top doctors, including the former director of the University of Pittsburgh Cancer Center and prominent neurosurgeons, have urged the use of headsets as a precaution.

Dr. Volkow said that the latest research is preliminary and does not address questions about cancer or other heath issues, but it does raise new questions about potential areas of research to better understand the health implications of increased brain activity resulting from cellphone use.

“Unfortunately this particular study does not enlighten us in terms of whether this is detrimental or if it could even be beneficial,” Dr. Volkow said. “It just tells us that even though these are weak signals, the human brain is activated by them.”

Most major medical groups, including the American Cancer Society, the National Cancer Institute and the Food and Drug Administration, have said the existing data on cellphones and health has been reassuring, particularly a major European study released last year by the World Health Organization that found no increased risk of rare brain tumors among cellphone users.

When asked to comment on the latest study, the leading industry trade group, CTIA – The Wireless Association, released a statement emphasizing recent studies that have shown no elevated cancer risk associated with cellphone use.

“The peer-reviewed scientific evidence has overwhelmingly indicated that wireless devices, within the limits established by the F.C.C., do not pose a public health risk or cause any adverse health effects,” said John Walls, vice president of public affairs for the trade group, adding that leading global health groups “all have concurred that wireless devices are not a public health risk.”

But the new research differed from the large observational studies that have been conducted to study cellphone use. In Dr. Volkow’s study, the researchers used brain scans to directly measure how the electromagnetic radiation emitted from cellphones affected brain activity..

The randomized study, conducted in 2009, asked 47 participants to undergo positron emission tomography — or PET — scans, which measure brain glucose metabolism, a marker of brain activity. Each study subject was fitted with a cellphone on each ear and then underwent two 50-minute scans.

During one scan, the cellphones were turned off, but during the other scan, the phone on the right ear was activated to receive a call from a recorded message, although the sound was turned off to avoid auditory stimulation.

Whether the phone was on or off did not affect the overall metabolism of the brain, but the scans did show a 7 percent increase in activity in the part of the brain closest to the antenna. The finding was highly statistically significant, the researchers said. They said the activity was unlikely to be associated with heat from the phone because it occurred near the antenna rather than where the phone touched the head.

In the past, any concerns about the health effects of cellphones have been largely dismissed because the radiofrequency waves emitted from the devices are believed to be benign. Cellphones emit nonionizing radiation, waves of energy that are too weak to break chemical bonds or to set off the DNA damage known to cause cancers. Scientists have said repeatedly that there is no known biological mechanism to explain how nonionizing radiation might lead to cancer or other health problems.

But the new study opens up an entirely new potential area of research. Although an increase in brain glucose metabolism happens during normal brain function, the question is whether repeated artificial stimulation as a result of exposure to electromagnetic radiation might have a detrimental effect.

Although speculative, one theory about how an artificial increase in brain glucose metabolism could be harmful is that it could potentially lead to the creation of molecules called free radicals, which in excess can damage healthy cells. Or it may be that repeated stimulation by electromagnetic radiation could set off an inflammatory response, which studies suggest is associated with a number of heath problems, including cancer.

Among cancer researchers and others interested in the health effects of cellphones, the study, listed in the medical journal under the heading “Preliminary Communications,” was met with enthusiasm because of the credibility of the researchers behind it and the careful methods used.

“It’s a high-quality team, well regarded, and if nothing else they’re showing that radiation is doing something in the brain,” said Louis Slesin, editor of Microwave News, a newsletter on the health effects of electromagnetic radiation. “The dogma in the cellphone community says that it doesn’t do anything. What she’s shown is that it does do something, and the next thing to find out is what it’s doing and whether it’s causing harm.”

Dr. Ronald B. Herberman, former director of the Pittsburgh Cancer Institute and now chief medical officer for the Intrexon Corporation, a biotechnology company in Germantown, Md., said, “I think it’s a very well-designed study, and they have clearly shown that there is biologic activity being induced in the nerve cells in the region where the antenna is the closest.” Dr. Herberman said skeptics about the risks of cellphones have focused on the fact that the type of radiation they emit is too weak to break chemical bonds and cannot plausibly be implicated in cancer. However, the new research suggests a potentially different pathway for cancer and other health problems to develop.

“I think it’s an important new direction to go in for biologists to start delving deeper into sorting out what might be going on,” Dr. Herberman said.

In an editorial accompanying the Journal article, Henry C. Lai, a University of Washington professor of bioengineering who has long raised concerns about cellphone safety, said he hoped the data would broaden the focus of cellphone research and health.

“The bottom line is that it adds to the concern that cellphone use could be a health hazard,” said Dr. Lai. “Everybody is worried about brain cancer, and the jury is still out on that question. There are actually quite a lot of studies showing cellphone radiation associated with other events, like sleep disturbances. But people have not been paying a lot of attention to these other types of studies.”

Dr. Volkow said future research may even show that the electromagnetic waves emitted from cellphones could be used to stimulate the brain for therapeutic reasons. She said the research should not set off alarms about cellphone use because simple precautions like using a headset or earpiece can alleviate any concern.

“It does not in any way preclude or decrease my cellphone utilization,” she said.