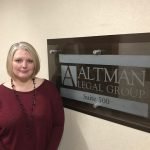 Beth Combs has been a legal assistant for 15 years after completing paralegal studies at Arlington Career Institute in 2003.  During her career, Beth has predominantly worked in the field of personal injury law.  She rejoined Altman Legal Group in November 2017 after a hiatus from her previous employment with the firm from 2011 to 2014.

Additionally, Beth is a veteran of the United States Navy where she worked in the advanced electronics/combat systems field as a Fire Controlman. In this capacity, she served as a Missile System Supervisor and Operational Readiness (ORTS) technician for the Aegis Missile System aboard Arleigh Burke Class Guided Missile Destroyer, USS Hopper DDG-70. Aboard Hopper, Beth held the distinction of being a Plank Owner and member of the Commissioning Crew. During her time in the Navy, Beth was also a participant in joint service operations for the Armed Services Inaugural Committee during the second presidential inauguration of President Bill Clinton; the recipient of meritorious advancement in rank; the recipient of the Navy and Marine Corps Achievement Medal, Good Conduct Medal, and National Defense Service Medal.

Beth has four children: Isaac, Mason, Madelaine and Sophie.  In her free time, she enjoys reading books about history, hiking, camping, and traveling with her family.  She has traveled to all 50 states and is currently adding to her list of countries visited abroad.  Beth and her family are members of First Baptist Church of Wichita Falls.